All that glitters is not gold… Get an inside look at the darker side of the entertainment industry and the life of Samantha Hart in Blind Pony. Don’t forget to enter the giveaway at the end! 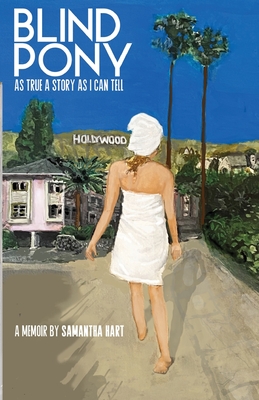 When your mother names you after your father’s affair, you might wish you were living someone else’s life.

For Samantha Hart, growing up on a farm in rural Pennsylvania had been no childhood idyll but rather a violent, surreal nightmare. A twisted vision of pastoral life part Faulkner part Dante. At fourteen years old, she ran away in search of her father, a character she only knew as Wild Bill. Discovering he wasn’t the hero she dreamt he’d be, she was on her own.

Arriving in Los Angeles at the peak of LA’s decadence where money, drugs, and good times flowed, she floated through a strange new world of champagne-soaked parties, high-stakes backgammon tournaments, and a whirlwind of international escapades flogging nude photographs. When a wealthy playboy mistakes her Pittsburgh accent for being British, it begins a spiral of white lies leading Sam to question everything she thought she knew about herself and who she could be.

Blind Pony is a story of healing and hope, a coming of age narrative intersecting themes of recovery, redemption, forgiveness, and the struggle it takes to define life on your terms.

”A FAREWELL TO THE FARM”

I opened the door to the barn with a bit of trepidation. The smells that once pervaded my senses—new-mown hay, leather, and living animals—had turned to a dank, musty odor. I held Vignette’s hand as we stepped carefully past the empty stalls, ready for something sinister to jump out at any moment. We ventured toward a stable in the back, and above us was the plaque I carved with a wood burner, the name “Misty.” Misty was born when I was eight years old and was the offspring of my beloved pony, Princess.

“Follow me.” I darted up the narrow wooden stairs. Vignette stayed close on my heels as we headed to my grandfather’s abandoned workshop to rummage around for something to pry off the sign. The remnants of a moonshine distillery sat cloaked in dust in an open cabinet, and as I breathed in the musky air, I could feel my grandfather’s presence and hear the nasty whistling sound he made when he was coming for me.

“Mommy, are you crying?”

I grabbed the crowbar, intent on rescuing Misty’s sign. It was a relic from my childhood, and I was unwilling to leave it to the wrecking ball.

“No, but she was my pony Princess’ baby, just like you are my baby. That’s why I got to name her and made this sign for her. Look, I have a scar on my finger where I burned myself making that sign.”

“That must have hurt. I love you, Mommy.”

“I love you, too.” Equal measures of joy and sorrow overwhelmed me, conjured by a place I thought I would never see again. We traipsed outside so I could stow the plaque inside the car, and Vignette spotted an old tractor.

“Look at this cool tractor, Mommy! Can I climb on it?”

“Yes, but be careful,” I said. My mind drifted. I could almost hear the chatter between my sisters and me as we saddled up at the corral to take our horses out for trail rides.

Princess was blind in one eye, so she kept a slower pace than the other horses as we galloped up past the oil rig with its rhythmic chugging and stench of old black oil. The sound of thundering hoofs would ring in my ears, and by the time we reached the top of Gobbler’s Knob, the view would be invisible through the thick cloud of dust, and I’d be as blind as Princess.

The past was so vivid, I almost forgot I wanted to capture this moment with Vignette. As I went back to the car to retrieve my camera, the familiar sound of the gravel crunching beneath my feet unspooled memories of a story my mother had repeated to me throughout my childhood.

Late one night, Bill Butter pulled into the gravel driveway well past midnight. Dean Martin’s just-released record “Volare” blared over the car radio. Bill continued his drunken crooning after turning off the ignition,

though, in his stupor, he left the headlights on. My mother, Clara, peered out the upstairs window to see her husband silhouetted by the car’s lights, stumbling up the stone path, cigarette dangling from his mouth, and a bottle of whiskey clutched in his hand. Annoyed and embarrassed by his returning from these late-night trysts with other women, which had become too frequent, she climbed back into bed, pretending to be asleep, and got tangled up in her oversized flannel nightgown.

A gust of frosty Pennsylvania wind followed Bill up the stairs to the bedroom. He pulled his pants down just far enough to expose his stiffened penis, then threw himself on top of his wife while endeavoring, with frustration, to unravel the nightgown.

Clara realized her best option for keeping their small children from waking was to make way for the inevitable drunken thrust between her naked thighs. When he found his way to an orgasm, he hollered out the name of his current mistress, Pammy Sue, and unceremoniously deposited the seed that would grow into a girl destined to be nothing but trouble. The first sign of said trouble began the very next morning with a dead car battery.

Nine months later, my mother gave birth to her fourth child on the first day of fall. Dad thought I would be a boy, and he named me Sam. Maybe he hoped I would be a boy so he could stop hearing about Pammy Sue. As luck would have it, he pulled four aces. I was his fourth daughter.

My mother’s frozen heart determined to immortalize her husband’s infidelity and spelled it out on the birth certificate. But for as long as I knew my dad, he never called me by any other name but Sam. I always thought the name suited me. My mother prodded me so often with the reason my name was Pammy that my official name repulsed me.

Vignette tugged on my sleeve and snapped me back to reality. “Mommy, mommy, can we go now? I’m hungry,” she moaned. “Me too,” I said, and we went back into the car. I threw my camera on the back seat along with the “Misty” sign, figuring I had enough memories of the place. Nothing could change what happened here.

As my daughter and I drove down Clever Road, I glanced back at the old farmhouse in the rearview mirror one last time. It would soon disappear forever, along with the lilac and forsythia bushes and delicate lilies of the valley that poked through the spring thaw each year. The springhouse and the old maple tree where I hugged my grandmother for the last time would be gone.

But they would live on in my memories, along with many things I wished I could forget

Samantha Hart’s career has spanned music, film, and advertising, earning her a reputation as an award-winning Creative Director. Her creative marketing campaigns brought prominence and Academy Awards to films such as Fargo, Dead Man Walking, and Boys Don’t Cry while earning cult status for independent features, Dazed and Confused, Four Weddings and A Funeral, and Priscilla Queen of the Desert.

With her partner, Sam built a successful company in the advertising industry, Foundation, with over forty employees and offices in Chicago and Los Angeles. Foundation earned distinction as an early disrupter of the traditional production and post-production models combining the two under one roof.

In 2017, Sam launched Wild Bill Creative which is a creative ideation company working with brand clients, non-profits, and start-ups.

Sam currently lives in Los Angeles with her husband, director James Lipetzky, and their sons, Davis and Denham.

Giveaway: Signed Copy of Blind Pony (Canada and US only) Closes July 18th