There’s a new book coming out soon, and if you enjoy science or speculative fiction, you’re going to love it! Check out The Awakening of Artemis by John Calia, coming this fall!

The Awakening of Artemis

Orphaned by war and disillusioned about her life, Diana Gutierrez-Adams is on a routine military assignment when she and her team are kidnapped by a domestic militia. She learns from her captors that her cryogenically-frozen grandfather is at the center of a high-stakes plan to steal technology that will change the world for greed and great fortune.

Challenged by the conspiracy and pulled by emotions she doesn’t fully understand, Diana’s rescue mission will change her life. What happens to her is unexpected, perhaps miraculous – an adventure that embraces all her hopes for finding her true self and her place in a world dominated by powerful elites and even more powerful artificial intelligence.

Diana knew that everyone who lived in the pods as well as anyone officially connected to the government had an embedded chip that enabled monitoring technology to identify where every individual was at any time. The chips also measured the secretion of enzymes and hormones. Algorithms had been developed to predict everyone’s wants and needs based upon those secretions. Over time, the algorithms learned from human response and adjusted their predictions accordingly – without human intervention. 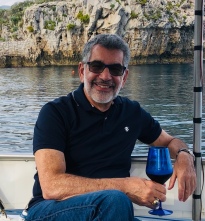 A Brooklyn-born, second generation American and the eldest of three boys, writing is his third career and the one about which he is most passionate. Following graduation from the US Naval Academy and active duty in the Navy, he embarked on a career in business. He began writing his blog “Who Will Lead?” in 2010 attracting over 115,000 readers. It inspired him to write his first book, an Amazon five-star rated business fable titled “The Reluctant CEO.” Currently he makes his home in Fairport, NY, a village on the Erie Canal.