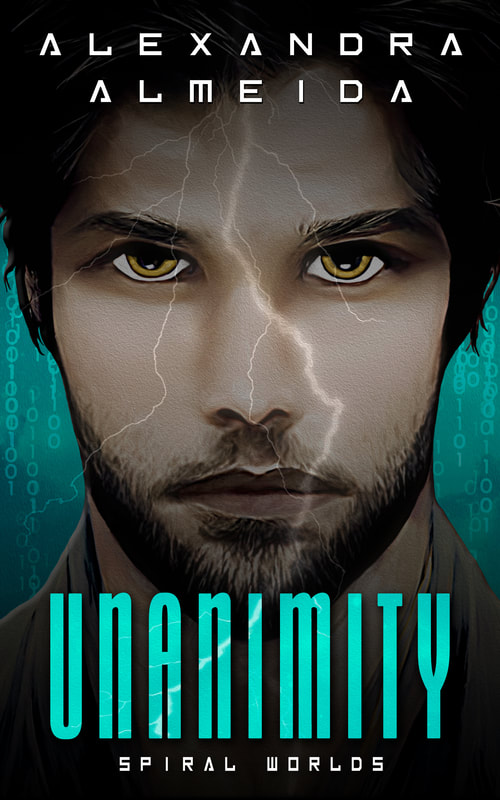 I’m organizing a book tour for the first novel in the Spiral Worlds series, Unanimity by Alexandra Almeida. The tour will run from January 23rd to the 27th and we’re looking for hosts. We have physical copies for reviewers in Australia and digital editions for everyone.

The road to hell is paved with good intentions.

Shadow is a reluctant god with a broken mind and a death wish. He used to be Thomas Astley-Byron, an affluent young screenwriter whose creativity and idealism saved a world from the brink of collapse. Together with Henry Nowak, an AI expert, Tom created heaven on earth by inventing a Jungian simulated reality that helps humans confront their dark sides. The benevolent manipulation platform turned the two unelected leaders into beloved gods, but now everything is failing. The worlds suffer as a sentimental Tom descends into his own personal hell, becoming the embodiment of everything he despises and a shadow of his former self.

His journey from an optimistic, joyful Tom to a gloomy Shadow is paved with heartache and sinister interference from emerging technology. Humans and bots fight for his heart, but their aims differ: some want to own it, some to dissect it, and others to end its foolish beat. Estranged from the love of his life—the activist poet Nathan Storm—Tom fails to realize the biggest threat comes from within. None of the sticky stories that steer his life end well.

Now, a young goddess—Estelle Ngoie—has been appointed to replace him, and unlike Shadow, Stella takes no prisoners, and her heart bleeds for no one.

Who’s pulling on Shadow’s heartstrings? Are their intentions malign or benign? It’s all a matter of perspective, and Shadow has none left.

An epic tale spanning across six days—one per book—and forty past decades of life lived across ten worlds and two universes.

Weaving sci-fi elements with social commentary and queer romantic suspense, Spiral Worlds explores the nature of consciousness and how it’s connected to a not-so-secret ingredient—story. As software consumes the world, intelligence is nothing but the appetizer; the human heart is the main course.

“I adored this work by Alexandra Almeida from cover to cover for its modern take on fantasy and the subversion of so many typical themes and ideas that have become tired and overdone in the genre.” “The queer storytelling elements are included beautifully and never made into a gimmick or overdone for the sake of themselves, and as such, they flow naturally with the fantasy and emotional elements of the narrative. I would not hesitate to recommend Unanimity as a sensational opening novel to a very promising series.”

Alexandra Almeida has over 25 years of experience in technology, strategy, and innovation. In her role as Chief Transformation Officer, she acts as a senior advisor to enterprise executives. Alexandra is an experienced speaker at events such as SXSW, Gartner Symposium, and the Women in Tech Series.

For the time being, and to protect her creative freedoms, Alexandra prefers to write using a number of pen names.

A heart-wrenching WW2 story of forbidden love and torn allegiances.

I’m organizing an exclusive “Review Only” tour for Fracture by Elyse Hoffman and I’m looking for hosts. The tour will run from December 19th to the 23rd and there are only 15 stops. There are physical review copies for US reviewers and digital for international readers.

Franz Keidel is a monsterous SS soldier: loyal, hateful, and devoted to Hitler. With a cold heart, he hunts down his Führer’s enemies, but one fateful mission will fracture his shield of ice.

While hunting for Jews, Franz stumbles across a familiar face: Amos Auman, his childhood friend. Amos is the only source of joy in Franz’s life, but he is also a Jew. Unable to bring himself to kill his friend, Franz vows to protect Amos from his fellow Nazis.

As Franz spends more time with Amos, bringing him food and books, he falls in love with his kind-hearted friend. How could he fall in love with a man, a Jew? How can he continue to hate Jews when a Jew has thawed his icy heart?

And what will Franz do if he has to choose between Amos and his loyalty to Hitler? What choices does he have when he is already beyond redemption? 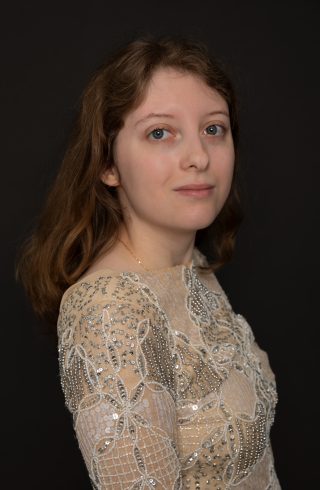 Elyse Hoffman is an award-winning author who strives to tell historical tales with new twists. She loves to meld WWII and Jewish history with fantasy, folklore, and the paranormal. She has written six works of Holocaust historical fiction: The Barracks of the Holocaust five-book series and The Book of Uriel. Elyse’s books are the way to go if you love history and want to read some unique stories.

Welcome to the book tour for Dreams of Song Times by Amy L. Bernstein. Read on for more info and don’t forget to enter the great giveaway at the end!

When sixteen-year-old Ell Gossamer’s two mothers mysteriously disappear, the teen human-mermaid hybrid quickly flees home with little more than a mysterious family keepsake, a book called “Dreams of Song Times.” Ell will learn astonishing secrets about her past—but only after endangering her life to save others. Standalone fantasy/LGBTQ+ fiction.

I sped away on Zif, imagining Angel watching until I was out of sight. I did not get far, however, before my body started shaking uncontrollably, Zif began weaving over the center line, and my vision blurred. I had to stop. Trembling, my breath coming in shallow gasps, I cut the engine and rolled Zif into a patch of woods that I hoped would shield me from the road.

In the gray light of a cold dawn, I sat down on wet leaves, drew up my knees, and hugged myself as tightly as I could. The shaking grew worse. I felt the oxygen mask clamped on my face, reliving every moment of paralysis that put me right on the line between life and death.

I vomited onto the forest floor, then closed my eyes and tried to regulate my breathing. I saw myself hovering above my body splayed on the bed in the shack, unable to move, utterly helpless. The urge to lie down on the cold ground and fall sleep nearly overtook me, as shock worked me over. Though seated, I felt my body begin to sway.

I could have died. 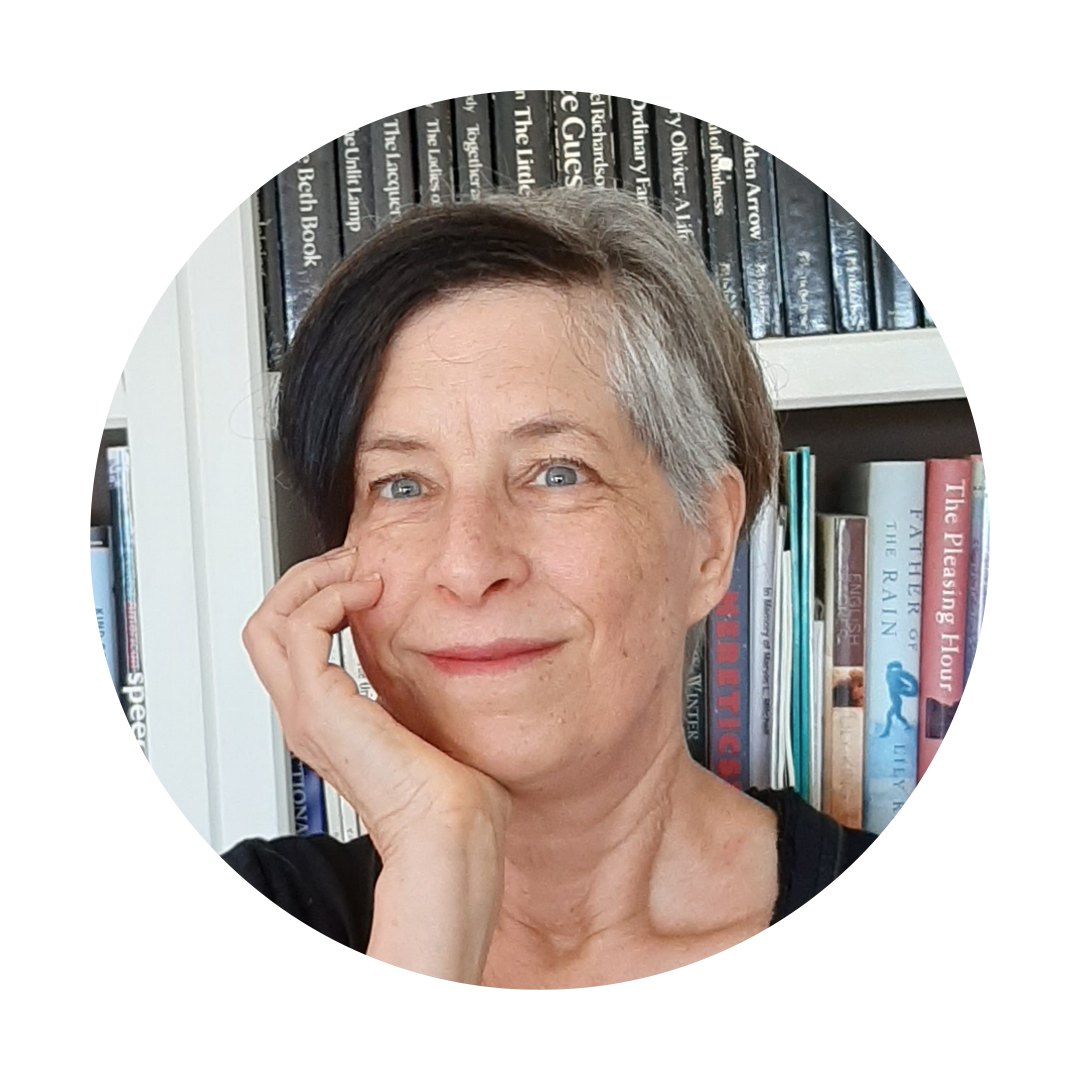 Amy L. Bernstein writes for the page, the stage, and forms in between. Her literary preoccupations include rooting for the underdog and putting ordinary people in difficult situations to see how they wriggle out. Amy is an award-winning journalist and speechwriter as well as a playwright. When she’s not glued to her computer, she loves listening to jazz and classical music, drinking wine with friends, and prowling around Baltimore’s glorious waterfront.