Welcome to the mini launch tour for Owen’s Terrarium by Julie Hiner. Ugh, just the name gives us chills!

This is the way that Owen’s life takes a drastic turn: with a forced surfacing from the basement of the Elm Film House, and an unexpected guest at Friday Fright Night.

Owen loves classic horror films, his exotic pets, and a beautiful cheese and wine pairing. Driven by an upward spike of pain as he fights the urges spawned by his sickness, he hides from the world.

At home, he relishes in the beauty of his carefully acquired exotic pets, works on the new, sterile terrarium in the basement, or devours a wheel of cheese while viewing a horror delight on the big screen in his film room. At the Elm Film House, he hides in the basement, examining reel after reel for flaws. He only surfaces to run a double horror feature at Friday Fright Night.

He is destined to fight the evil within, alone, except for his pets. Until a milky-skinned, chocolate-haired goddess enters the stage of his troubled life. New feelings emerge. Old ones boil beneath the surface. What path will Owen be destined to follow?

One of happiness? Or one drenched in blood?

Owen narrowed his eyes, staring down at the butterfly pinned to a square of white oak. Its wings, the colour of an ocean, spread out around its body. The sickness swirled through his veins, searing him with pokers of sharp pain. The butterfly twitched. The only way to end his suffering was to end the butterfly’s.

He pulled the hood of his hoodie over his head, tucking his dark locks behind his ears. A shiver crept down his spine. There wasn’t enough meat on his wiry frame to fend off the chill of the basement.

He pushed on the flat top of the pin. The butterfly fluttered its wings in a desperate attempt to escape its fate. The silver weapon slid deeper into its body. Black-purple oozed with a painful slowness from the tiny hole piercing its flesh.

The ocean wings fluttered wildly, slapping against the white oak, pieces tearing from the delicate paper-like flying contraptions. Owen pushed harder. The pin pierced through the other side of the body. As the wings slowed to a twitch, Owen’s shoulders relaxed. Minimal damage had been done by the butterfly’s frantic flapping. The butterfly wasn’t going anywhere. It twitched again, and this time the tremor caused a convulsion to ripple through its entire insect body.

With a final push, the pin hit the white oak. The thick inner fluid of the arthropod trickled down both sides of the cylindrical body, staining the wood. Not for long. Owen knew from experience that white oak didn’t stain permanently, and that with a dab of his homemade concoction on a cloth, he’d be able to clean up the backdrop of the butterfly’s forever home.

It was best. To be able to secure the insect to its permanent afterlife dwelling while it still breathed. To be able to watch it twitch slowly to its end, the last few breaths dissipating from its body as it finally lay still.

Owen licked his lips. He picked up a pair of tweezers and clamped them to the bottom end of the butterfly’s tubular physique. With deliberate precision, he guided the pin, still piercing the creature, up toward the butterfly’s head, causing a gush of innards to escape in a thin line of black-purple sludge.

Placing his hands in his lap, he stared at his work. Nothing moved. The silence in the room deepened, as if the entire space had taken a deep breath and exhaled slowly into a meditative state.

The dim lightbulb hanging from the centre of the wooden rafters flickered, then went out.

Owen stared into the dark basement, the shapes of forgotten sheet-covered furniture loomed around the perimeter of the musty space. It was the only place Owen could find any peace. He was the oldest of the dozen children Agnes—Mrs. Harden— had collected. She was like the old lady in the weather-beaten house who collected cats. Only, Agnes collected children. Unwanted

orphans abandoned by their mothers, or thrown into the evil core of the earth by tragic events that took away the few parents who actually wanted their spawn. Agnes loved lonely orphans. Owen had been the last one added to her collection. At sixteen years old, he’d been shocked at the news that he’d be leaving the wet basement of the dark convent.

The bulb flickered back on, casting long shadows from the furniture over the cold, concrete floor.

Owen stared at the butterfly’s body. Dead. The long, bulbous black cylinder bleeding out, even after the twitching had stopped. Owen’s mind spun. Hot blood pumped through his veins, boiling his skin. Sweat sprouted over his forehead, trickling down his face.

Its body morphed, the dark tube contorting into a naked, small figure. A human figure.

Owen blinked several times. The butterfly face turned up toward him, two dark bulbs peering, questioning. Pale pink flesh pushed through the black skin casing, ripping a fissure, splitting the face between the round, black eyes.

Fleshy salmon cheeks burst through the insect skin. The beady insect eyes fell away as the casing that housed the insect body split open. Bright-blue eyes stared back at him—innocent, fresh, unharmed by the evil of the world.

The young boy’s flesh was moist with the fluids that kept it safe inside its mother’s womb. An innocent young being birthed into a world of evil. Its cheeks were wet with mucus, the bright-blue eyes exploring his, seeking him.

quivered. A tear escaped from the corner of his eye, trickling down his sweat-soaked cheek, mixing with his stinky sweat.

The slimy pink lips of the newborn child moved, releasing a tiny mewl.

Owen watched the infant lips as they released coo after coo. The soft sound slithered into the pits of his ears, soothing the flesh that had been burned by the evil words of a woman who, instead of loving him, had hated him. The bright-blue eyes sparkled under the fluttering blinks of the newborn’s delicate eyelids. The baby cooed again, the fragile sounds wrapping soothing hands over Owen’s hardened ears.

The hot sweat pouring over Owen’s face, his body, sticking his shirt to his back, cooled to a cold, running river, soaking him in an ice bath. He shivered. 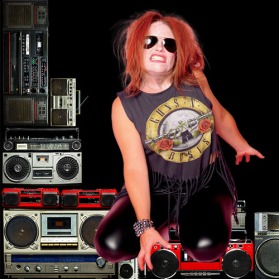 Julie Hiner is an author, storyteller, and blogger. She has independently published an inspirational work of non-fiction and two dark crime novels. Several of Julie’s short horror stories have been published, and she has collaboratively released a horror anthology. Julie’s home-base is KillersAndDemons.com where she serves up toxic cocktails of 80s metal, ritualistic murder, and raw horror.

Julie lives in her home-town in Canada, nestled near the rocky mountains. A hardcore 80s rocker at heart, Julie’s writing is infused with music of all eras. Her dark crime novels are a fusion of 80s metal, 70s acid rock and dark story telling. Obsessed with the dark mind of the serial killer, Julie’s characters are based on bits and pieces of some of the most terrifying monsters to roam the earth.