Trick or Treat? The Baker’s Guide to Risky Rituals by Kathryn Moon is the perfect witchy tale for this time of year! Read on for an exclusive excerpt and a giveaway as sweet as the treats in the book — A signed paperback, swag pack (signed postcard, magnet, and two character buttons), and a $20 amazon gift card! 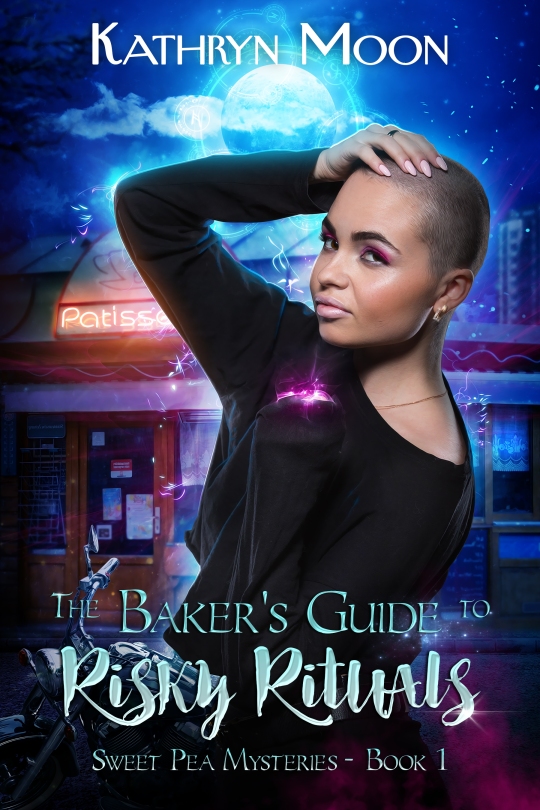 A Kitchen Witch with a bite, a King of Hell on a mission, and a candy coated town hiding bitter secrets.

Josie Benoit, gourmet patissier and kitchen witch, may not be a Sweet Pea native but she’s made the small town her home and she intends on keeping it that way. When trouble rolls into town on the seats of shining motorcycles, and the safety of her home and her own reputation are put at risk, Josie bands together with her coven to protect her world from a dark influence.
If only that dark influence wasn’t so deliciously handsome.

King Beleth is not a demon to be trifled with.
Leader of the Hell’s Bells MC and one of the great warlords of the Bowels, Beleth takes pride in his work and has the patience of a… man who knows what is best is worth waiting for. Known as Bell—to his friends, which you are not—he’s come to Sweet Pea to dismantle the core of good at the heart of the little town. But upon arrival he discovers three things that might just get in the way of his work:
Sweet Pea is more disgustingly adorable than they were warned.
The town has a coven of witches protecting it.
He’s developing a sweet tooth.

He was painfully handsome, face broad and lips wide, eyes narrow. His weathered leather jacket was fitted to those shoulders with all the care of a lover. His eyes studied Josie until every hair on her body stood on end. She crossed her arms over her chest and lifted her chin, studying him with equal interest as he glanced down at her bakery case and frowned.

“Where are the cupcakes?”

Josie blinked and it took a moment to shake that whisper soft voice out of her head, like shooing away an affectionate stray cat, knowing it could scratch at any moment.

“This is a patisserie. I don’t carry cupcakes.” She could give him the spiel she gave to Mrs. Montgomery when the old busybody asked. Cupcakes could be bought at the grocery store for less than a dollar a piece. Josie’s wares were baked with techniques that took professional training, if not at least regular and studied practice. Mrs. Montgomery still asked every other visit.

“Three dollars for… what is that?” He asked, sneering at the brightly dyed macarons.

“It’s a cookie, but harder to make,” Josie said, cocking her hip. His eyes licked at the movement and the response of her skin was a betrayal, her imagination conjuring warm fingertips stroking up her side and raising goosebumps. She had to stifle her gasp.

“It’s a rip off. I could fit two of those in my mouth for one bite,” he said.

“For six dollars you could.”

Purchase on Amazon and Books 2 Read!

For a chance to win this AMAZING giveaway — A signed paperback, swag pack (signed postcard, magnet, and two character buttons), and a $20 amazon gift card, click on the link below!

Kathryn Moon is a country mouse who started dictating stories to her mother at an early age. The fascination with building new worlds and discovering the lives of the characters who grew in her head never faltered, and she graduated college with a fiction writing degree. She loves writing women were are strong in their vulnerability, romances that are as affectionate as they are challenging, and worlds that a reader sinks into and never wants to leave. When her hands aren’t busy typing they’re probably knitting sweaters or crimping pie crust in Ohio. She definitely believes in magic.