Congratulations to author Mallory McCartney on the exciting new release of Queen to Ashes, the next installment in the Black Dawn series!

Read on for an exclusive excerpt and a chance to win signed copies of Heir of Lies and Queen to Ashes! 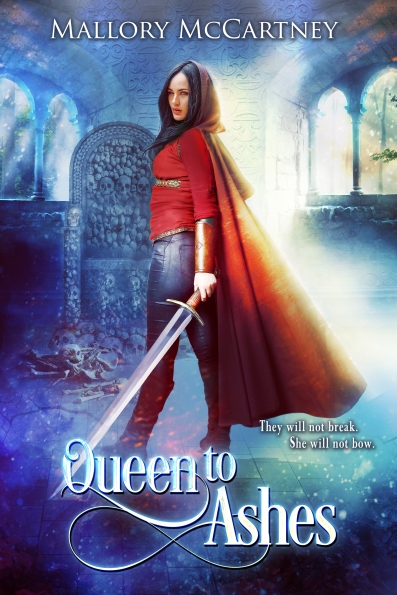 “You lived your entire life feeling like half of you was missing. Fight for the missing part. Fight for this.”

Emory Fae has abandoned everything she thought she knew about her previous life on Earth. Stepping up to her role as Queen of Kiero she makes a startling sacrifice- feigning her allegiances to Adair Stratton, the man who murdered her parents and casted Kiero into ruin. Emory’s memories slowly piece together, and she soon realizes the Mad King may not be all he seems— and the man who was once best friend, may be fighting beneath the surface.

With the King’s attention on her, can she buy Black Dawn Rebellion enough time to recuperate their forces? And when the times comes, will she be able to kill Adair, ending his tyranny and rising herself as the rightful Queen? Fighting to hide her secret, Emory navigates the brutal trials of the Mad King, trying not to lose herself in the process.

Sequel to Heir of Lies, now a bestselling series, the sparks are ignited, as Emory learns the cost of freedom, and her heritage. Will the rebels unite in time? A sinister force has spread across the land, stripping everyone bare- their betrayals, their secrets, their intentions. But above all, what will their decisions cost? By refusing to give in to the darkness, will Emory rise as Queen?

The darkness kissed her, embraced her. Squinting, Emory tried to make sense of where she was but was met with a black, dense wall. Sweat pooled at the base of her neck, warmth flaring through her body. Fear choked her then as she gulped down stale air. She knew she wasn’t alone because she felt them before they said anything. “Emory, you need to wake up.” Memphis’s voice, just barely a whisper, caressed her. Right beside her left ear, another voice sounded. “Em, wake up.” Brokk’s rough voice was harsh and clear, but she felt her body still being pulled, pulled down into the black abyss. A third voice then sounded; one she could only recognize from her dreams. “Emory, darling, wake up.” Her mother. Her voice danced all around her, and she clawed blindly, trying to connect with her lost friends and family. Trying to find them. Silence landed heavy, and a putrid smell enveloped her senses. It smelled of rotting meat. Bile rose in her throat as a she felt a slimy, boney hand wrap hard around her wrists, pulling her toward it. She couldn’t scream; she couldn’t move.  Sweat drenched every inch of her body as the creature she couldn’t make out leaned closer, whispering right in front of her, “Emory, I have found you.” Swivelling around, she was met with darkness until the monster pulled her closer, its breath tickling her ear. “And you belong to me.” The knife slid in between her ribs, pain blossoming, and cackles spun around her. Then, she was dragged down into the darkness.

Screams tore from her chest as she shot up. Drenched in a cold sweat, it took her several minutes to register where she was and the guard standing at the foot of her bed, arms crossed and eyebrows raised. She screamed again, pulling her blankets around her, her nightdress clinging to her curves. “Who gave you permission to be in here?” she demanded. Smirking arrogantly, he said, “I did.” Blinking, she recognized the man as the same one that guarded her down in the cells. Rubbing her eyes, she tried to shake the feeling of that damp death-like hold of the creature in her dream. She pointed to the door. “Get the hell out.” He scoffed, rolling his eyes. “It’s time to start your day. The king awaits.” Throwing a bundle at the bottom of her bed, he turned his back, briskly stating, “You have five minutes to get ready. I’ll wait outside.”  Shutting the door, he left her in stark silence.  It was time.  Panic clutched her heart, squeezing it, threatening to break it. She couldn’t breathe. The walls seemed stretched too thin.

She could do this—she had to do this. Emory would grant the rebels the time they needed, the time she needed. Dying wasn’t an option. Besides, she was already dead to the people who had believed in her.  Leaning forward with shaking hands, she opened the parcel. Several stacks of light black clothes spilled out, including shirts, pants, and undergarments. A blood red sash sat atop them all. Lovely. Sitting on top all of this, though, was a light, sheer, gold chest plate. Squinting, she leaned closer to inspect it. Markings she didn’t recognize adorned all the edges, and its sheerness was unearthly. She was so close, her breath was fogging it, her reflection lost. Strong leather buckles joined at the shoulders; its back plate just as impressive. She shimmied out of bed, quickly dropping the armor. Emory went through the motions of getting dressed numbly. Braiding her long ebony hair back, she looked in the mirror behind her. She didn’t recognize the woman standing before her, the stark cheekbones, emptiness in her eyes, bruised skin underneath them. Tying her sash tightly, she set her resolve.  Emory Fae of Earth was dead.  Everything had led up to this moment.  Her parents shaped their world, defying the paths they were told to go down: A warrior from the Shattered Isles and a Prince of Kiero were never supposed to break away and build a refuge— The Academy—for peace. In her heart, Emory knew they had made mistakes, but their life’s dream was to fight and to ensure everyone, no matter their ability, would have a place to call home.  Emory loosened a breath. She would not let her parents’ dream die. If Adair wanted a challenge, he would get one. She would make him pay. For her family. Her friends. For herself. 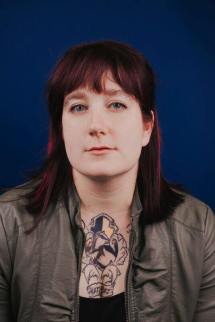 Mallory McCartney currently lives in Sarnia, Ontario with her husband and their three dachshunds Link, Lola and Leonard. When she isn’t working on her next novel or reading, she can be found day dreaming about fantasy worlds and hiking. Other favorite pastimes involve reorganizing perpetually overflowing bookshelves and seeking out new coffee and dessert shops.

For you chance to win signed copies of the Black Dawn series, click the link below!